During the times when neurodegenerative challenges in older individuals are beginning to add to the healthcare burden, attempts are being made to test whether awareness-based activities, especially inward-focused activities such as mindfulness, are of any use in slowing down age-related cognitive decline among humans.

Some of the newer studies are suggesting that it is likely that meditation may slow down cognitive decline with intense and regular practice. In a study which followed-up age-related cognitive measures up to 7 year after the meditation training was just published in the Journal of Cognitive Enhancement (2018). It suggested that, “performance improvements observed during periods of intensive practice were partially maintained several years later. Importantly, aging-related decrements in measures of response inhibition accuracy and reaction time variability were moderated by levels of continued meditation practice across the follow-up period”.

Previously, another study published in the Neuroreports (2005) suggested that meditators showed more thickness in certain parts of the brain as compared to controls and this thickness was related to the meditation experience (see the accompanying image- click to enlarge).

If there is one take-away from this emerging evidence, it is this: keep up your personal home practice. 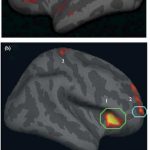 Figure– Cortical regions thicker in meditators than in controls. (a and b) Statistical map depicting between-group differences in thickness at each point on the cortical surface overlaid on the inflated average brain. All points meeting a P < 0.01 threshold (uncorrected) are displayed to better illustrate the anatomic extent of the areas and the relative specificity of the findings. Numbered regions: (1) insula, (2) Brodmann area (BA) 9/10, (3) somatosensory cortex, (4) auditory cortex. (c and d) Scatter plot of mean cortical thickness of each participant in the subregion above threshold within each circled region of (c) insula and (d) BA 9/10, plotted versus age. Meditation participants: blue circles; control participants: red squares.
(c) Lazar et al. (2005).  Neuroreport.